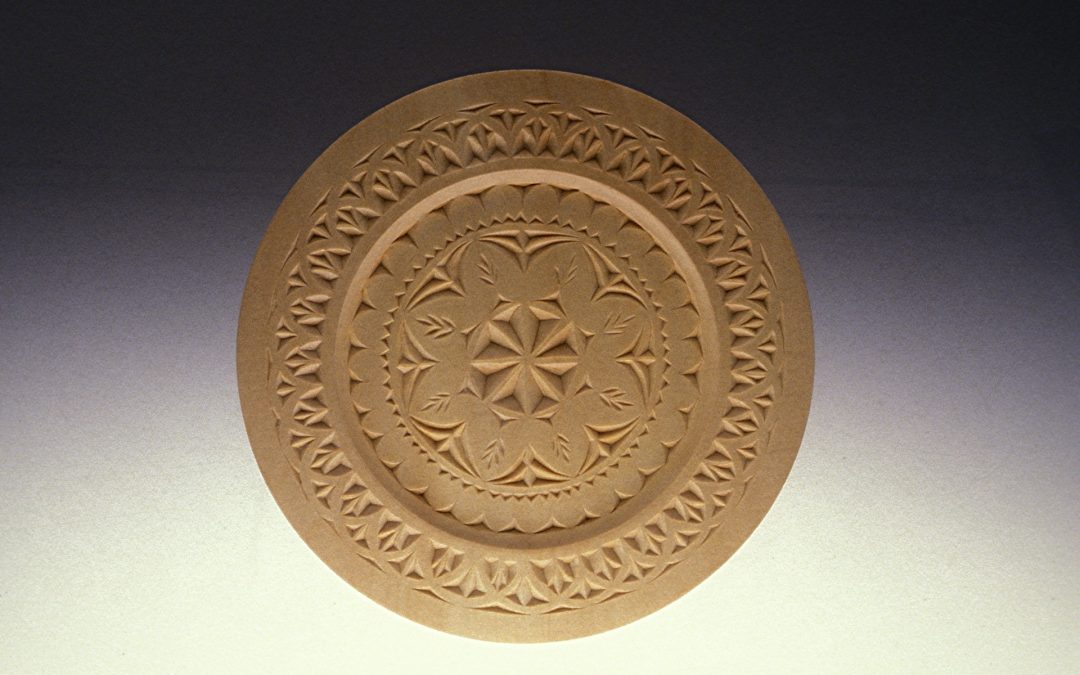 This article is the third in a series featuring an artist exhibiting at the DubuqueFest Art Fair in Washington Park on May 19-20, 2012. Click here to read other Artist Profiles.

Ken Nelson, a wood carving artist from Iowa City, makes a simple statement about his work: “I like carving, and I like wood.” Using oak, walnut, cherry, and basswood, as well as exotic woods from the rain forest and all over the world, he creates ornately adorned  plates, wall hangings, and jewelry boxes. With 20 years’ experience showing his work at art festivals, he will bring his wood carvings to the 2012 DubuqueFest Art Fair on May 19-20.

One of his pieces combines the wood of American basswood, which is “hard enough to be sturdy, but strong enough to be carved,” with a dark African wood called “wenge.” After creating a box by gluing the black wenge to the blond basswood, he planed and sanded the piece, then used hand tools to embellish the top and sides with geometric carvings.

This style of ornate wood carving originated in the Baltic area and in Scandinavia. “It’s all geometric, and in some of the carvings that I make, there are some patterns that have been handed down through the centuries that have meaning. Like fertility, or prosperity, or the harvest.”

Mixing time-honored patterns with original ideas, Nelson’s wood carving also reflects his heritage. “My name used to be ‘Nilsson’ and my grandfather changed it when he came to Ellis Island, so it’d be more Anglicized. We still have relatives over there. There’s a kinship there.”

He notes there is nothing automated about his handiwork. “I have an array of small carving knives, I have some carving stones, and I have a ‘strop,’ like a barber strop. It’s all done by hand. It’s hard work.” Creating a box takes about one hour per side, plus two hours for the ornately carved top. To finish the pieces, he coats them with “conversion varnish,” a furniture quality, rock hard finish that shows the depth of the wood grain.

“It took forever,” he said about the circular carved wall hanging pictured here. He filled each quadrant with closely spaced curves that intersect to make new shapes, laying out the pattern with a straight edge and a compass, and drawing directly on the wood before it is carved.

Such closely clustered geometric patterns look familiar to people from countries such as Latvia, Lithuania, Poland, Finland, Denmark, Sweden, or Norway. “When I’ve done shows in Chicago, I’ll have people walk by my booth and there a lot of people that came over after the fall of the Iron Curtain. Now, Chicago is actually the largest Polish city outside of Warsaw… People walk by my booth and they say, ‘Ohh, they do this in my country!’”

Although he didn’t exhibit at DubuqueFest in 2011, over the years, Nelson has shown his work here about ten times. “Dubuque is such a beautiful old city, with all the architecture. It’s very conducive to inspiration.” He appreciates not only the beautiful old 19th century buildings, but the art patrons he meets in Dubuque. “People are very receptive. I’ve had people come over, ask all the right questions, they had an informed opinion about art in general, my work in particular.”

The right questions to Nelson are about his creation process. He said, “Sometimes people’s perceptions only go as far as their last trip to Wal-Mart. Other people are a little bit more informed. And they have a perception about what they’re seeing that’s based on their past experience, and if they don’t know, they’ll ask, ‘What about this?’ or ‘How did you arrive at this?’ and it seems like there are quite a few people in Dubuque that have a pretty informed opinion.”

When asked what’s inside his carved boxes, Nelson said, “That’s the thing about boxes. You can hide things there, you can put special things in there. People look at it and they know there’s a space inside, it conjures up other ideas, about hiding something, or maybe being able to view something special inside… I think people have an affinity for boxes in general.” The interiors of the boxes pictured here are lined at the base with hunter green felt.

Nelson’s art career started with a different medium. “I had an uncle I was very close to, that I used to spend summers with, who was a professional metal sculptor, and he has a lot of large pieces all over the country, and is known for what he does – Verne Shaffer. He was very influential on me, and then I started off doing some oil painting. And I got a scholarship to the Art Institute of Chicago when I was very young, and I went there for 2 semesters, and that also had a large effect on me.”

He anticipates DubuqueFest because, as he said, “I think people have a sincere interest in what’s going on [at the Art Fair] that weekend, and I think the artists sense that as well, and are appreciative about that… If someone really understands a piece of my work and really appreciates it, then that means a lot to me sometimes.” Look for Kenneth Nelson’s handmade wood carvings at the DubuqueFest Art Fair in Washington park, downtown Dubuque, Iowa on May 19-20, 2012 .