About the brochure and poster art for 2011 DubuqueFest 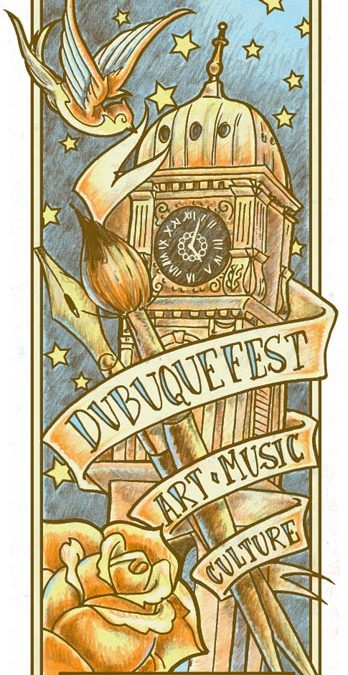 Impressed with the eye-catching and unique DubuqueFest posters that are appearing around town? The stunning artwork for this year’s official poster, and the coordinating DubuqueFest brochure cover art were designed by local graphic designer, tattoo artist, and visual artist Rich Rossignol.

Rich, who works as the creative director of JMJ Screen Printing in Dubuque, has served as the DubuqueFest designer for five years. He has also volunteered as the designer for three Writers Guild book projects, and in 2008 and 2009 co-directed Voices From The Warehouse with current DubuqueFest directors Aaron Hefel and Paula Neuhaus.

DubuqueFest Art Fair director Paula Neuhaus states with enthusiasm, “I cannot say enough good about Rich, his generosity, and his talent. I would follow him anywhere, work with him again and again.” She sees the grassroots nature of Rich’s style as based on the joy of creating and producing for the sake of expression.

As the visual center of this year’s DubuqueFest poster, a golden fleur de lis rises over the brush and pen of an artist, symbolizing the three parts of the festival:  Music, Art, and Culture. Rays of light shine from the surrounding clouds as flowing banners announce the dates and location of the 2011 event. The banners are adorned with stars and crested with the logo of the Dubuque County Fine Arts Society.

The cover art for the 2011 DubuqueFest brochure echoes the same powdery blue and gold color scheme of the poster, and centers on the Dubuque Town Clock. A bird flies down through a starry sky with a rose adorning the base of the image. Waving banners encircle the artist’s pen and brush, wrapping them to the clock, as if to embrace the arts within our community.

Rich will also create his highly anticipated and always celebrated DubuqueFest t-shirts featuring the original poster art on a white cotton shirt in a variety of sizes. JMJ is the official t-shirt screen printer for DubuqueFest.

Also look for a second run of last year’s famous “I (fleur de lis) DubuqueFest” tee in a brand new color scheme.  Last year, people loved that shirt, and it was sold out by Friday evening. Get yours early!

T-shirts will be for sale on Saturday May 21 and Sunday May 22 at the Dubuque County Fine Arts Society info tent in Washington Park during the Art Fair. Commemorate this year’s festival with a t-shirt for yourself, your kids, and everybody you know who cares about the arts in our community!

Thank you, Rich Rossignol, for using your talent to adorn this visual celebration of 2011 DubuqueFest!