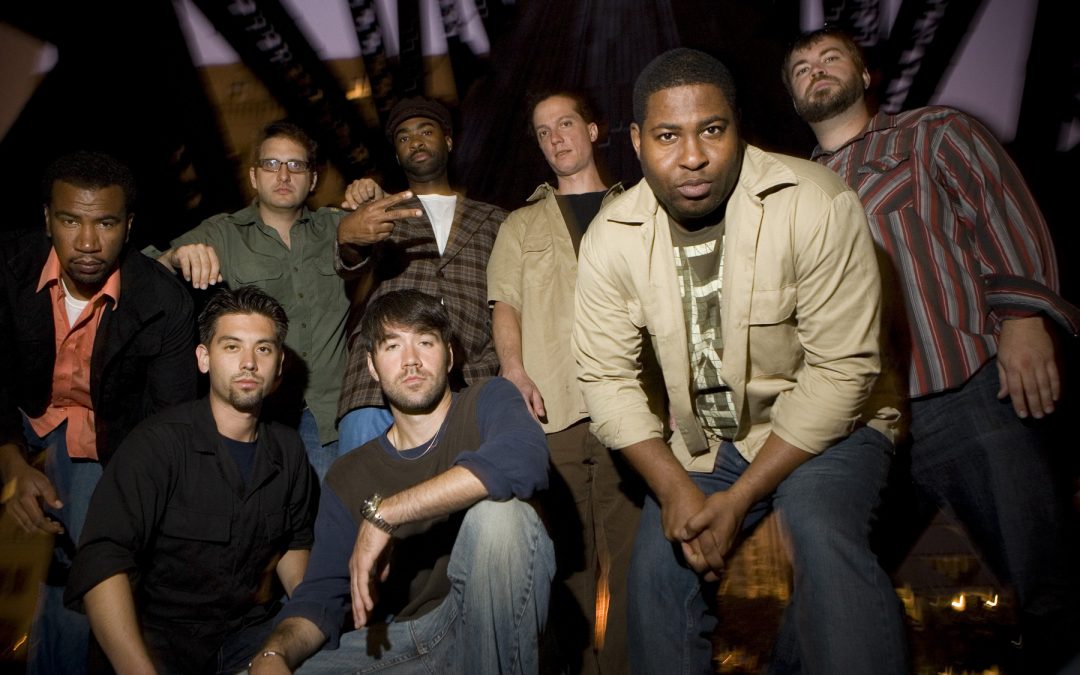 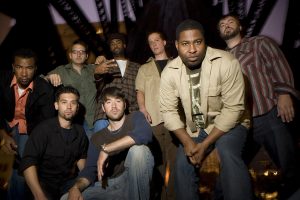 Get your afrobeat groove on at DubuqueFest Fine Arts Festival when Chicago Afrobeat Project (CAbP) brings its global sounds to the Town Clock Main Stage during a full weekend of music, art, and culture. Enjoy a free concert under the stars in the heart of historic Dubuque, Iowa at 8:15 p.m. on Saturday May 19, 2012.

The eight-member CAbP will be joined onstage by artist Kelli Becker, sharing their fiery, danceable afrobeat sound, a Nigerian-influenced blend of jazz and funk. During their DubuqueFest performance, expect to hear predominantly original music, along with songs from their new record, Nyash UP!  The band has released three previous albums: a self-titled album (2005), (A) Move to Silent Unrest (2007), and Off the Grid (2008).

Chicago Afrobeat Project guitarist David Glines says, “We have taken the approach of playing afrobeat versions of artists we admire on Nyash UP!  Every track on the new record is a cover – albeit a very open interpretation of the song.” Click here to listen to a track from the new album, a mash-up of “Just Like That” by Nigerian Afrobeat pioneer Fela Kuti, along with Radiohead’s “I Might Be Wrong.”

Lyrics are penned by band member Squairblaq, with some phrases in pidgin English or the African language of Yoruba. “All of our lyrics reflect issues that matter to us,” says Glines. “It’s impossible to write any other way. Squair is responsible for most of the lyrics on our new record, and in one track especially he points out some of the difficulties the middle class is experiencing in America. On another we draw attention to the injustice of war and those fighting on the frontlines. The genre itself is steeped in a tradition of political and social commentary, and we are extending that tradition.” 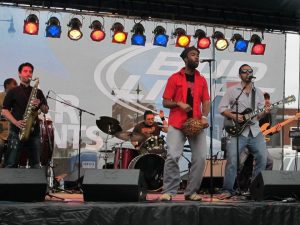 Chicago Afrobeat Project creates music as a collaborative team effort. Glines says, “More often than not, we begin writing collectively with one person beginning a line, then another, and another… until finally we’ve settled into the basics of a groove. We usually record this composition during a session or two, and then follow it up with one or two people working independently on the song to add new parts and possibly rearrange the song. Every now and again we have someone bring a completely written song to the band, but it is more of a collaborative process than anything.”

“I believe this process is one of the things that has kept us going for nearly 10 years – everyone contributes. Everyone has skin in the game so to speak. All of us have formal training in music at some point in our careers. Some studied music at college, and all of us have been performing on the scene for such a long time that the learning comes through experience. And we’re of course all still learning.”

Chicago Afrobeat Project will entertain the DubuqueFest audience with their danceable and funky global musical style, featuring a hard-hitting horn line and complex percussion rhythms. The 8:15 performance on the Town Clock Main Stage tops off a full music schedule at Saturday’s DubuqueFest Fine Arts Festival. Glines says, “I am very much looking forward to it. I think I can speak on behalf of the entire band on that point.”

To learn more, find the Chicago Afrobeat Project on Facebook, at chicagoafrobeatproject.com or on MySpace. For a full listing of musical performances at the 2012 DubuqueFest Fine Arts Festival, see the Music Schedule.